Remarks by PM Lee Hsien Loong on the situation in Myanmar, excerpted from an interview with BBC's Asia business correspondent Karishma Vaswani held on 2 March 2021.

Karishma Vaswani (BBC): I would like to move on to Myanmar at this point, Prime Minister. At least 18 people have been killed in Myanmar so far. Your Government has called this inexcusable, yet you have not imposed sanctions. What is your read about it? 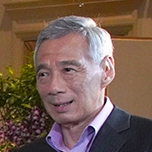 PM Lee Hsien Loong:  It is a tragic situation – what is happening in Myanmar. [It takes them] back to where they were after 1988, where they had major riots and the military took power, imposed martial law. They [then] decided that that was not tenable. They made a 7-Step Roadmap to Democracy, and they told the world that was what they wanted to do. We were all sceptical, but they were serious about it, and they did move in that direction systematically, and eventually held elections. Aung San Suu Kyi’s party won, and they did institute a civilian Government. They had another set of elections after that, and this is the third set of elections.

Now, after all that journey to a civilian Government, albeit with a big military influence in the system, to have to go back and have the military take over again, it may or may not be according to the constitution, but it is an enormous tragic step back for them. Because there is no future that way. They knew that, that was why they moved forward into elections and a civilian Government. To use lethal force against civilians and unarmed demonstrators, I think it is just not acceptable. That is disastrous not just internationally, but disastrous domestically, because it means that civilians, everybody in Myanmar, knows. You may try to squeeze down the internet, but news gets around, and the Myanmar population knows who is on their side. If they decide that the Government is not on their side, I think the Government has a very big problem.

To arrest Aung San Suu Kyi as well as the Ministers and the President and charge them with walkie talkie offenses and things like that, I do not think that will help solve the problem. You really have to get back, release Aung San Suu Kyi, negotiate with her and her team, and work out a peaceful way forward for Myanmar. Outsiders have very little influence on this. You can ostracise them, condemn them, and pass resolutions or not, but it really has very little influence on what the Myanmars will do. It had zero influence the last time round, and the only impact was, for the lack of anybody [else] willing to talk to them, they fell back on those people who were willing to talk to them, which was China, and to some extent, India. It was an uncomfortable position for them, but it did not cause them to decide that they must do what the Americans, Europeans, or even the ASEAN countries, would have preferred them to do.

I think we have to be realistic about this. We have to express disapproval for what is done, which is against the values of many other countries, and in fact a large part of humanity. But to say that I will take action against them, where does this lead? Now, the demonstrators are saying military intervention in Myanmar? Is the 82nd Airborne going to arrive?

BBC:  What you say is more engagement, no sanctions? Do economic considerations come before these humanitarian concerns?

PM Lee:  I do not think it is a matter of economic considerations or to benefit from trade from Myanmar. The volume of trade is very small for us and for many other countries. Question is, what can make a difference to them, and if you do impose sanctions, who will hurt? It will not be the military, or the Generals who will hurt. It will be the Myanmar population who will hurt. It will deprive them of food, medicine, essentials, and opportunities for education. How does that make things better?

BBC:  What is the end game then? How do you see this playing out?

PM Lee:  I hope that wisdom will prevail, as it did the last time, and the Tatmadaw will conclude that to go the military route does not lead anywhere, and they have to work out an arrangement with the civilian Government, which has been democratically elected.

BBC:  How realistic is that, given that we had seen live rounds fired?