Firstly, I would like to thank Mr Donahue and Secretary Pritzker for their kind introductions and particularly the Secretary for taking the time to be here with us.

I would also like to thank the US Chamber of Commerce and US-ASEAN Business Council for hosting this reception. This is the third time I am here in four years speaking to this forum, and I am glad to see many familiar faces here.

Since Singapore became independent in 1965, American businesses have played a major role in Singapore’s economic development. They have invested heavily in Singapore – developing infrastructure, creating jobs, transferring technology and management practices. General Electric was once the largest employer in Singapore, and it still has 3,600 people there. Seagate, which makes disk drivers, at one time, made more than half of the world’s disk drives in Singapore. They are still a company that is important to us. They and many US companies have found Singapore to be a good springboard into the region. For example, in the new economy, we have LucasFilms, which has a building in Singapore which they call the “Sandcrawler Building”, and looks like a Sandcrawler, is their first purpose-built facility outside of the US. Both sides have taken advantage of our FTA, in order to develop our relationship. It is a gold-standard FTA that has promoted trade and investment between our two countries. American exports to Singapore have expanded substantially, and American banks have been able to expand in Singapore because of the FTA.

As Singapore continues with our next stage of our development, we still welcome the US companies to come and to invest in Singapore. One of the areas we are interested in, as the Secretary mentioned, is to develop Singapore into a Smart Nation, using data, technology, sensors, networking to improve the lives of our citizens and create a knowledge-based economy.

America is one of the leaders in this new economy based on innovation, collaboration, and critical thinking.

Singapore is seeking to attract a new wave of American investment. We are introducing coding in secondary schools. We are helping to nurture start-ups in fintech, social media, and e-commerce. And we welcome American companies to continue helping us with our transformation, to take advantage of the many opportunities and talent in Singapore.

Our growth depend not only on our remaining competitive, but also on our region staying stable and prosperous.

Although there are some dark clouds on the regional horizon – economic and some strategic uncertainties too, Asia is still a bright growth spark in the global economy, and a peaceful region in the world. It accounted for a two-thirds of global growth last year. China and Japan are large economies – the second- and third-largest in the world. And India is another large economy. Southeast Asia is a promising emerging market – not just of 10 separate countries, but now with the ASEAN Economic Community, a more integrated, single market. It has 620 million people, most of whom are young, eager, and hard-working. A combined GDP of US$2.6 trillion, which will, by 2030, on present trends, become the 4th-largest single market in the world. The major economies in the region are already seeking to develop this potential. China has launched its “One Belt One Road” initiative, to help develop the infrastructure in the region. India has an “Act East” policy.

Amongst ourselves, we are also seeking to spur growth through further economic integration. Thus we have an ASEAN-China Free Trade Area, the ASEAN-India Free Trade Area, and ASEAN-Japan Comprehensive Economic Partnership. We are further negotiating the Regional Comprehensive Economic Partnership (RCEP), including ASEAN, plus the Northeast Asian countries, plus the South Asian countries like India, plus the Australasian countries – Australia and New Zealand. Within Asia, the different countries are coming together, increasing their economic cooperation, widening their integration, developing more mechanisms to work closely together. But at the same time wanting to stay an open region, linked with America, Europe, and the world.

US Role in Asia

There is potential and promise in Asia.

America has always understood this. After all, your longstanding security presence in Asia is the bedrock of our peace, stability and prosperity.

During the Cold War, your economy was the dynamo that propelled our economic development. Your leaders understood that the desire for a better life would turn people away from war to peace, and ultimately thwart the ambitions of the Communist states in Asia. America upheld the principles of economic liberalisation and free trade, and in fact was the global leader of these principles. You helped to build Japan, Korea and the Philippines after the war, sending aid, engineers, advisors and technical experts. You built an open and fair international trading system under the General Agreement on Tariffs and Trade (GATT), which multiplied trade and investment.  You opened your markets to your friends in Asia, and the rest of the world too, fuelling the East Asian economic boom. It was growth through trade, not war that made the difference. And as countries became more economically interdependent, conflict became a remote and unattractive option.

Importance of the TPP

Today, America has a unique opportunity to anchor its engagement in the Asia-Pacific with the Trans Pacific Partnership (TPP).

You know the facts, but they are still worth repeating. The 12 parties in the TPP, we represent 40% of global GDP, a third of world trade, a market of 800 million people.

The TPP will be an economic game-changer for the US because improved market access will mean cheaper products for consumers and more exports for manufacturers. It will incorporate into TPP provisions on human rights, intellectual property protections and safeguards for labour and the environment. There will be strong standards to support innovation and benefit many US technology giants. But those are just the economic benefits. There are strategic significance in the TPP too.

Because the TPP is vital to the America’s engagement in the Asia-Pacific. It will add substance to America’s “rebalance”, which cannot just be about the military, or the 7th Fleet. It will enable the US and its TPP partners to shape the norms of regional economic exchange by setting a high bar for future trade agreements, whether in the Asia-Pacific or beyond.

In pushing for the TPP, and concluding the negotiations, the Obama Administration clearly understands the TPP’s role in securing America’s future, not just its prosperity but its place in the world.  We know that this has been politically difficult. This is a tough election year, the American people are wary of US active global engagement, and economic uncertainty has led to concerns about jobs and competition from overseas.

These are all understandable, even valid concerns. But we hope that all parties will focus on the longer-term, bigger picture. Because there are no winners, only losers with protectionism. Economic development across the world will be blocked. Less interdependence means the clear advantage of cooperation and interdependence over conflict and war will be weakened.

The Asia-Pacific represents an important growth region for businesses, including American companies. The TPP will be bigger, and more impactful than any of the existing regional trade agreements. If America wants to secure interests for the future, it must take ratify the TPP or lose the opportunity. As Americans say, you have to “be at the table, or be on the menu”.

For America’s friends and partners, ratifying TPP is a litmus test of your credibility and seriousness of purpose. Every one of the TPP signatories has had to make sacrifices in order to accept the TPP agreement, and jointly bring about this win-win outcome. Nobody wants to re-open negotiations. Everybody would like to have something better, but nobody wants to re-open the process, with no prospect of doing better, and every chance of having it fall apart. Asian countries want America to be engaged. But we need to know that this engagement will be sustained, we need to know that agreements will be upheld, and that Asia can depend on America. Your ratification of the TPP therefore will be a clear statement of your commitment to and your confidence in our region. So I hope all of you here, who have a vested interest in the success of the TPP, and in America’s friendship, cooperation and trade in Asia, will lend your voices to support this.

America has helped create and maintain the current world order and international rules that we all have a stake in and all countries benefit from. No other country has the economic capacity, political strength or the soft power to play this role. It is America’s primary responsibility – unescapable – as the preeminent global power, to continue to chart the course ahead for the world.

Thank you very much. 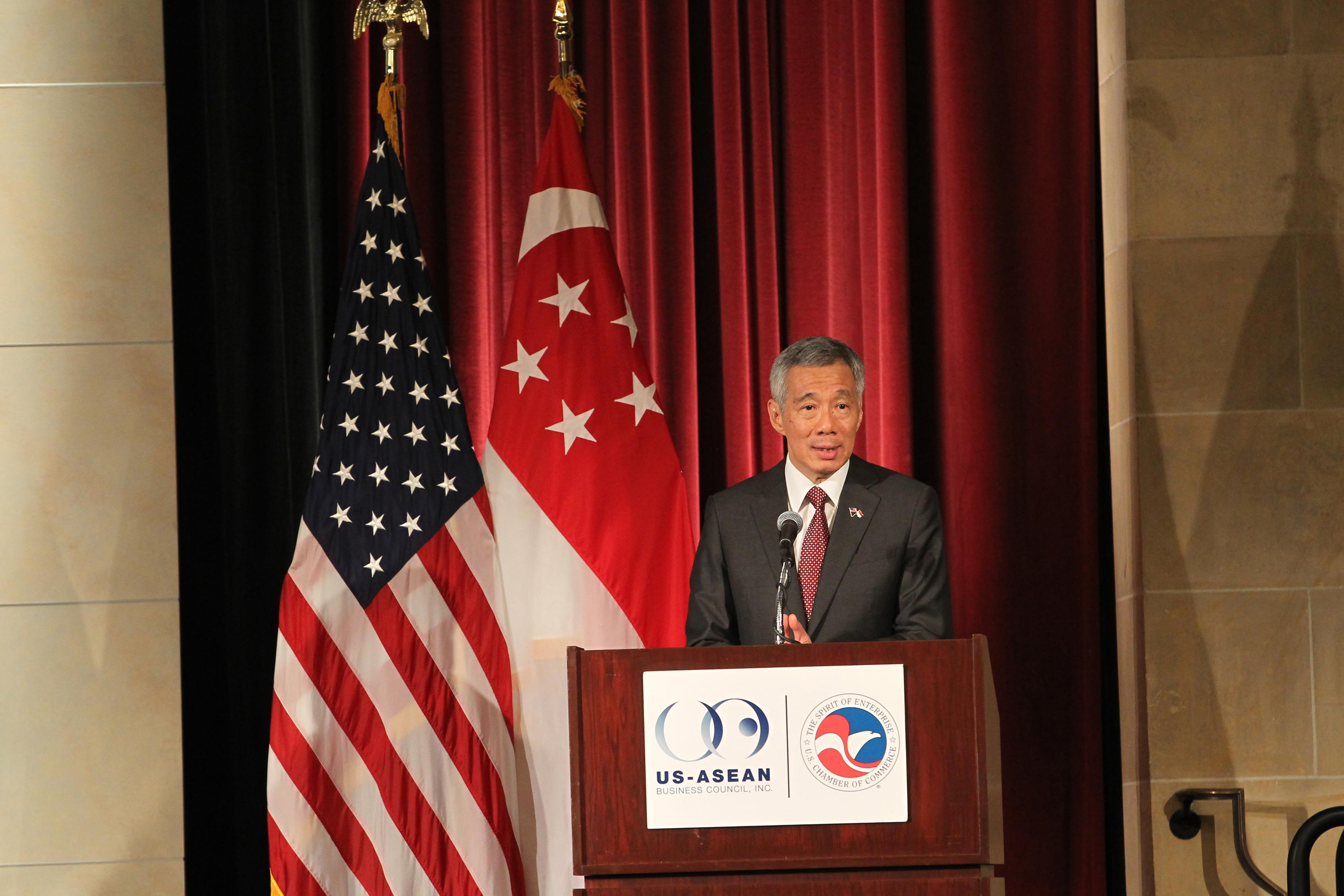