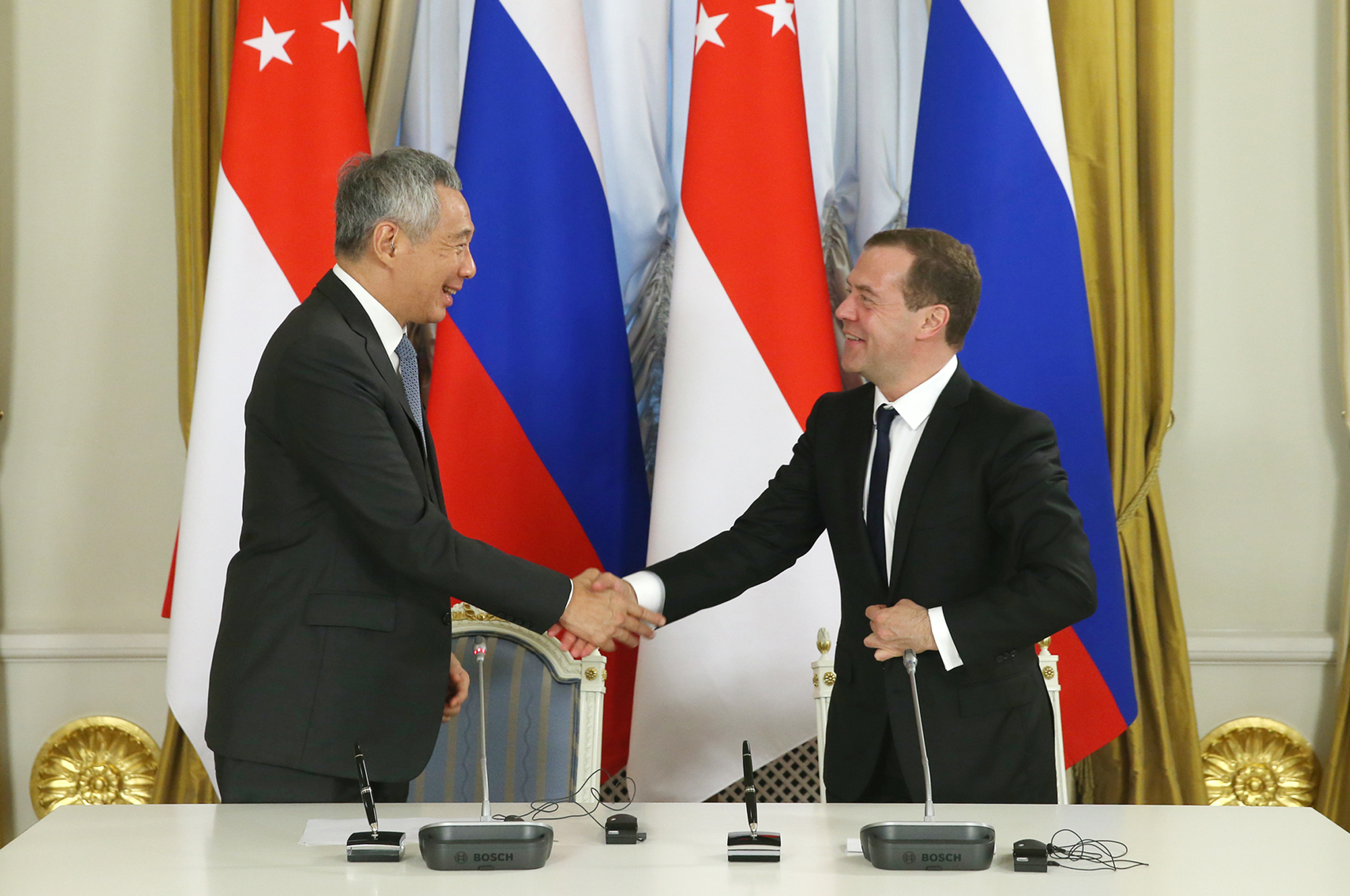 Thank you Prime Minister Medvedev for the generous hospitality and for hosting me and my delegation here in Moscow. We are very happy to meet you again, we met just last year in Kuala Lumpur and this time in Moscow.

We have longstanding and deep relations with Russia which started soon after we became independent more than 50 years ago, when we signed a trade agreement. We established diplomatic relations in 1968. My father, then Prime Minister Lee Kuan Yew, believed that Russia would play a major role in world affairs. So, when I was a teenager, he encouraged me to study Russian, which I did. In 1970, he made his first visit to Russia and eventually visited many times in his life. Even after he retired as Prime Minister, he kept the links up and took an interest in Skolkovo Moscow School of management and became its board member. He was a keen supporter of the Russia-Singapore Business Forum, which helped link up business people on both sides and broaden our economic cooperation.

So I am very happy to continue building on this foundation and taking our relationship another step forward. This visit is a significant milestone. This is long overdue for me personally because the last time I was here, was in 1978 on my honeymoon and I was here once before that as a student in 1972. I visited Moscow and what was then Leningrad. This time round, I took the chance to revisit some of these old places. Some things are still the same Krasnaya Ploshchad is still Krasnaya Ploshchad, that is the Red Square, the Tsar Kolokol and the Tsar-Pushka are still there at the same places and as big as ever. I visited the Novodevichy monastery and cemetery, now a UNESCO world heritage site – historic, beautiful and peaceful. In many other aspects, things are totally different. The world has completely changed, so has Moscow. Two nights ago, I had dinner on the top of the Russian Academy of Sciences Building. There was a beautiful restaurant there, I went out to the balcony and looked to the Moscow River and Moscow skyline where I could see in the distance the financial district – skyscrapers and many modern buildings, looking towards the future based on a deep and rich past.

Prime Minister Medvedev and I had very fruitful discussions, we took stock of our relations and cooperation and discussed how to do more together. Our economic ties are growing strong, there are many investments in both directions. Russian companies like Lukoil and Gazprom are in Singapore. Singapore companies are beginning to be successful in Russia – Amtel, in property and real estate, Educare which provides services in education, Food Empire, which makes coffeemix amongst other things. Changi Airport International is co-managing several airports in Russia, including one in Sochi which we will be flying into later this afternoon. Our trade is growing rapidly -over the last ten years, it has almost quadrupled. But in absolute size, it is still small and far from its full potential. Last year, the volume was about $US 5.6 billion, making Russia our 21st largest trading partner. Not in proportion to the significance of Russia or the importance of our bilateral cooperation, so that is one key reason why I am here - to see how we can grow this.

Last year, Prime Minister Medvedev and I welcomed the strong progress made at the last Intergovernmental Council (IGC), especially Russia’s agreement to enter into a Singapore-Eurasian Union Free Trade Agreement (FTA). I am very happy that we signed a Memorandum of Understanding (MOU) with the Eurasian Economic Commission (EEC) yesterday to establish a platform for regular interactions between the EEC and Singapore. To identify areas for collaboration and to become more familiar with one another, and hopefully to pave the way for a feasibility study and negotiations on the FTA. Such an FTA will give a big boost to the economic relationship and to companies wanting to expand operations in each other’s territories.

Our relations go beyond economic ties. Our cultural ties are growing, we have been in discussions with the Russian Government and have advanced plans to build a Russian Cultural Centre in Singapore which will serve not just the Russian community and Russian visitors, but also showcase Russian culture. We found a good site, it is in a good place, and we look forward to the day we see at least one golden Russian-Orthodox dome on the skyline of Singapore.

Our universities have strong partnerships with your institutions. You have very strong scientific and technological capabilities, our students go back and forth, and our researchers go back and forth. On this trip, I hosted a reception at the hotel for Singaporeans here and many Singaporean students came, including one high school group from my old high school – National Junior College, here for a 2-week Chemistry research programme at the Moscow Chemical Lyceum. I told them, I wish I were your age, when I was your age we did not have any such exchange programmes but now they do, and we can do many more. The MOUs that were just signed will further develop the cultural and educational, and people to people links.

We also discussed Russia’s role in the Asia Pacific region and in Southeast Asia. You have an important role to play. In Northeast Asia of course, and particularly being involved in the issue of denuclearisation of the Korean Peninsula. But also in Southeast Asia, where ASEAN has welcomed Russia as a dialogue partner, and a participant in the East Asia Summit, ASEAN Defence Minister’s Meeting-Plus and the ASEAN Regional Forum. We are going be celebrating the ASEAN-Russia Commemorative Summit in Sochi to review the progress of this relationship over the last 20 years. I look forward to meeting President Putin there this evening.

I would like to thank Prime Minister Medvedev once again for his hospitality, and deeply encouraged by the strong interest and commitment on both sides to boost ties. We should build on this momentum. I hope Prime Minister Medvedev can come and visit us in Singapore. He was last there in 2009 and on that occasion, we took a significant step. We set up the High Level Russia-Singapore Inter-Governmental Commission (IGC), which is chaired by Russian First Deputy Prime Minister Shuvalov and on my side, Deputy Prime Minister Tharman Shanmugaratnam. This has steered our cooperation in many areas such as culture, education, healthcare, agriculture, legal, and continues to expand its scope into governance and counter-terrorism. So the next time Prime Minister comes, I hope we will be able to do even more. Our 50th anniversary of diplomatic relations is 2018, I hope by then, we can open the Russian Cultural Centre in Singapore, and we will have a good Eurasian Union-Singapore FTA to sign.  Thank you very much.